Google down - up again with Agatha Christie's Banner

Around 16:00 London time I started to see Internet going down. Some of the websites were not loading. Others were loading.

Investigated further and found that the websites using Google Ad Serving platforms are down.

And finally discovered that whole Google is down.

At 17:02 London time I could find followings were down

I checked twitter and it seemed I’m the first on twitter to report this. At least I couldn’t find any other tweets on this subject.

While I was tweeting, Twitter went down ;) or may be overloaded by those people who couldn’t get into any of Google services.

Finally at 17:17 London time Google is back to life again and world is saved. 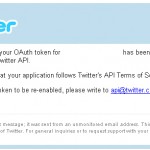